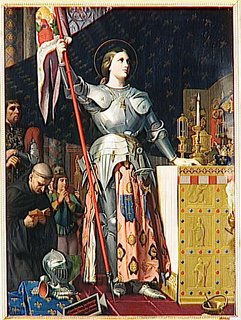 We tend to think that women have just been liberated in the last few decades. When I was a child, I mean, women's role models were nurses and, er, housewives. Nowadays, of course, women can do anything. Always could, I suppose, but now it's commonplace.

One of the last places women became “equal” was on the battlefield. In previous U.S. Wars, a “woman's place” was behind the lines, tending wounds or making beds — riveting stuff — but were seldom in the line of fire. Now — women are on the front lines, and are in positions of command and power.

This recent phenomenon has precedent, though. During the Middle Ages, there were several Orders that included female Knights.

The first known military order of women knights was the Order of the Hatchet, founded in Catalonia in 1149 by Raymond Berenger, count of Barcelona, it died out during the lifetime of its original members. It was organized to honor the women who defended the town of Tortosa against an attack by the Moors. A similar story comes down to us of a woman named Jeanne Hachette, who fought to repel a Burgundian assault on the town of Beauvais in 1472. Some historians think the hatchet symbolism came from her name, even though her story is dated 320 years after the Order of the Hatchet was created.

The hatchet itself has become a symbol for feminism, though because of its “violent” aspects, feminists per se have dropped its symbolic use, while lesbians have made it a pride symbol. The symbol is known as the labrys, from the word labia, because of its lip-like shape.

Elias Ashmole, 17th century chemist and historian (and who, incidentally, was the first known Freemason — the first Freemason whose actual name has been recorded as becoming a Freemason, that is), wrote in 1762 about noble women becoming knights in his The Institution, Laws, and Ceremony of the Most Noble Order of the Garter:

"The example is of the Noble Women of Tortosa in Aragon, and recorded by Josef Micheli Marquez, who plainly calls them Cavalleros or Knights, or may I not rather say Cavalleras, seeing I observe the words Equitissae and Militissae (formed from the Latin Equites and Milites) heretofore applied to Women, and sometimes used to express Madams or Ladies,though now these Titles are not known.

"Don Raymond, last Earl of Barcellona (who by intermarriage with Petronilla, only Daughter and Heir of King Ramiro the Monk, united that principality to the Kingdom of Aragon) having in the year 1149, gained the City of Tortosa from the Moors, they on the 31 of December following, laid a new Siege to that place, for the recovery of it out of the Earls hands. The Inhabitants being a length reduced to gread streights, desired relief of the Earl, but he, being not in a condition to give them any, they entertained some thoughts of making a surrender. Which the Women hearing of, to prevent the disaster threatning their City, themselves, and Children, put on mens Clothes, and by a resolute sally, forced the Moors to raise the Siege.

"The Earl, finding himself obliged, by the gallentry of the action, thought fit to make his acknowlegements [sic] thereof, by granting them several Privileges and Immunities, and to perpetuate the memory of so signal an attempt, instituted an Order, somewhat like a Military Order, into which were admitted only those Brave Women, deriving the honor to their Descendants, and assigned them for a Dadge, a thing like a Fryars Capouche, sharp at the top, after the form of a Torch, and of a crimson colour, to be worn upon their Head-clothes. He also ordained, that at all publick meetings, the women should have precedence of the Men. That they should be exempted from all Taxes, adn that all the Apparel and Jewels, though of never so great value, left by their dead Husbands, should be their own.

"These Women (saith our Author) having thus aquired this Honor by their personal Valour, carried themselves after the Military Knights of those days."

In 1233, nobleman Loderigo d'Andalo of Bologna founded the Order of the Glorious Saint Mary, the first religious order of knights known to grant the rank of militissa to women. In 1261, Pope Alexander IV formally approved of this order; Pope Sixtus V suppressed it in 1558.

In 1441 orders were founded that were open exclusively to women of noble birth. After serving a three-year term of probation, women were made knights (militissae) during a ceremony in front of an altar, with a sword placed upon their shoulder by a male knight.

The Order of the Garter accepted women almost from its founding. Between 1358 and 1488, at least 68 ladies were inducted. Many were of royal blood, of wives of Knights of the Garter, but some women were neither.

The armed Order of Saint John (which later became the Order of Malta) had women attached to it, but they were not knights. They were soeurs hospitalières, who lived in convents, and they were the counterparts of the frères prêtres or priest brothers. These women of the Knights Hospitallers lived under the order's rule, and provided menial and hospitaller duties. Convents were founded in Aragon in Sigena, San Salvador de Isot, Grisén, and Alguaire. In France they were found in Beaulieu (near Cahors), Martel and Fieux. A Knights Hospitaller convent existed in England in the 1500's as well.

Another military order, the Order of Santiago, founded in 1175, admitted married members, and shortly after its inception began to admit unmarried women, organizing them into convents. By the late 13th century, there were six: Santa Eufenia de Cozuelos in northern Castile, San Spiritu de Salamanca, Santos-o-Vello in Portugal, Destriana near Astorga, San Pedro de la Piedra near Lérida, San Vincente de Junqueres. The order of Calatrava also had a convent in San Felices de los Barrios.

There is no evidence that Jeanne d'Arc (Joan of Arc) was ever knighted, or that any title was bestowed upon her. She was burned at the stake by the English at the age of 19. Some twenty-four years later Pope Callixtus III reopened the case. The new finding overturned the original conviction. Her piety to the end impressed the retrial court. Pope Benedict XV canonized her on 16 May 1920.

The rest of this article is by François Velde to whom we owe a debt of gratitude for his research.

In 1645, when a Turkish fleet threatened the island of Malta, a French nobleman, Louis d'Arpajon (1601-79), called his vassals, raised an army of 2000 men, found ships and provisions and sailed for Malta. On 27 July 1645, a grateful Grand Master granted to him and his eldest son the right to wear and to bear in his arms a cross of Malta, and to one of his younger sons the right to be admitted as a minor in the order and to be promoted grand cross at the age of 18; furthermore this privilege was to be transmitted to his successors as head of his house, and in case of extinction of the male line it would pass to females.

Their younger son Louis-Marie, vicomte de Noailles (1756-1804) was called to the privilege. He married his cousin the daughter of the duc d'Ayen and had among others a younger son Alfred-Louis-Dominique (1784-1812), baron of the French Empire, whose only daughter by his cousin Charlotte de Noailles de Mouchy was Anne-Charlotte-Cécile (d. 1858). She married Charles-Philippe-Henri de Noailles, duc de Mouchy, and their son Antonin-Just-Léon-Marie (1841-1909) was grand-cross of St. John. The Gotha Français also names his grandson and successor Henry, duc de Mouchy (1890-1947) as grand-cross, but does not say if the privilege continued.

Modern French orders include women, of course, in particular the Légion d'Honneur (Legion of Honor) since the mid-19th c., but they are always called chevaliers. The first documented case is that of Marie-Angélique Duchemin (1772-1859), who fought in the Revolutionary Wars, received a military disability pension in 1798, the rank of 2nd lieutenant in 1822, and the Legion of Honor in 1852.

Traditionally, French women on whom the Légion d'Honneur or other order is conferred use the title "chevalier." However, a recipient of the Ordre National du Mérite recently requested from the order's Chancery the permission to call herself "chevalière" and the request was granted.

The first woman to be granted a knighthood in modern Britain seems to have been H.H. Nawab Sikandar Begum Sahiba, Nawab Begum of Bhopal, who became a Knight Grand Commander of the Order of the Star of India (GCSI) in 1861, at the foundation of the order. Her daughter received the same honour in 1872, and granddaughter in 1910. The order was open to "princes and chiefs" without distinction of gender.

The first European woman to have been granted an order of knighthood was Queen Mary, when she was made a Knight Grand Commander of the same order, by special statute, in celebration of the Delhi Durbar of 1911. She was also granted a knighthood in 1917, when the Order of the British Empire was created (the first order explicitly open to women). The Royal Victorian Order was opened to women in 1936, the Order of Bath and Saint Michael and Saint George in 1965 and 1971 respectively. Queen consorts have been made Ladies of the Garter since 1901 (Queens Alexandra in 1901, Mary in 1910, Elizabeth in 1937). The first non-Royal woman to be made Lady Companion of the Garter was Lavinia, duchess of Norfolk in 1990, the second was Baroness Thatcher in 1995. On Nov. 30, 1996, Marion Ann Forbes, Lady Fraser was made Lady of the Thistle, the first non-Royal woman.

This vision revealed unto you by Mary, the Sacred Fem, at precisely 10:55 PM